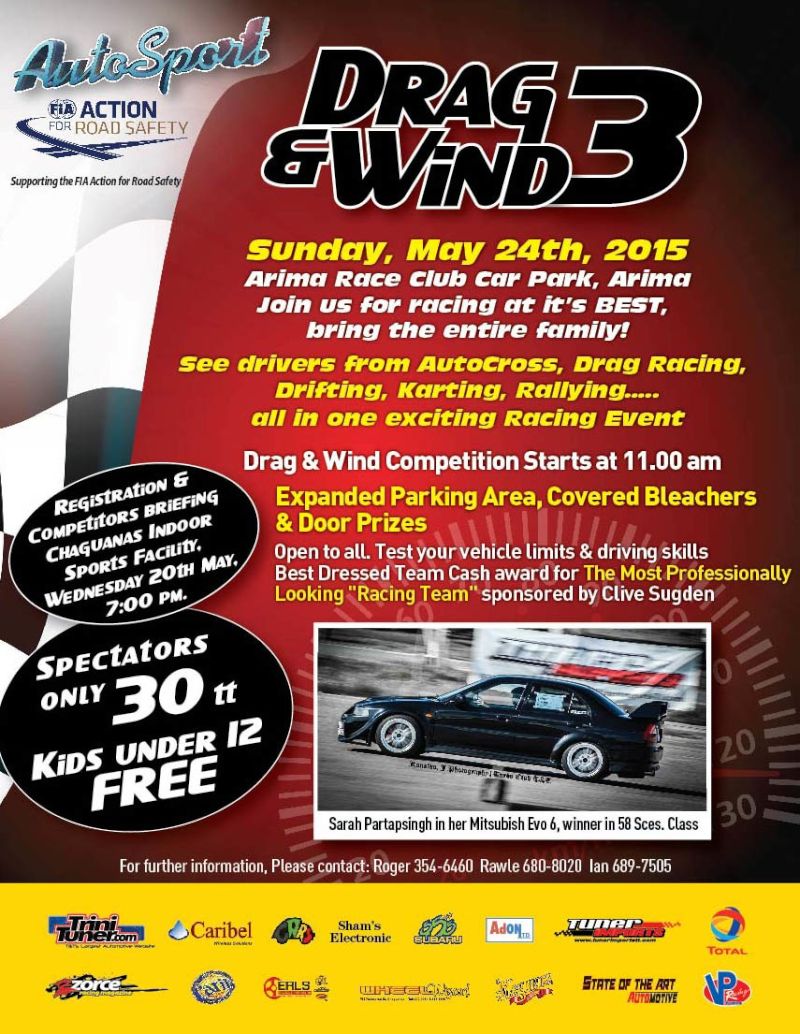 Competition starts from 1pm but teams will be in practice sessions from 10am.


Come out in your numbers and support your teams!

AutoSport’s Drag & Wind#2 was successfully executed on Sunday 12th April at ARC. This Event clearly showed that we are getting back into our groove of staging highly entertaining events, smoothly executed to finality, where winners are declared in every Class contested. And this time around final two competitors were able to enjoy racing for a best two in three to determine the winner.
As we always state, this unique event has succeeded in bringing out a host of new young drivers who have been able to move on and successfully compete in higher levels of Motor Sport competition. This we shall continue to focus and build on as we experiment with different concepts in the future.
We saw some first-timers also in winners row, and some “not so first-timers” winning for the first time – never say give up. After two events, when competitors were allowed to change classes and walk with their points, we now move on to the third event, carded for 24th May, when Classes must be confirmed for the rest of the year.
Starting off from launching at the "Christmas Tree", we had two competitors recording identical “Best Reaction Times” of 0.004 seconds, first time we have had a tie at the same event.
And at the top we see a very close battle between some of the best with Nicholas Mooloo recording his second “Fastest Car Of The Day” in two straight Events. But being pushed to third place behind eventual Open Class winner Alistair Rahamut and second place Ajamal Mustapha, who makes that trip from Tobago for practically all D&W Events. And we again congratulate Alistair on his sportsmanship when Ajmal experienced mechanical problems, and waited for some time for Ajamal’s Subaru to be repaired. This did not happen and Ajmal eventually conceded the Open Class win to Alistair.
We shall also be seeing some competition off the track with different “Teams” now designing their special jersies for Team members. This has triggered former very outstanding Circuit Driver (and yes he was also quite successful in competing at D&W Events) Clive Sugden through his company, Consultants And Workover Services, to sponsor a cash prize of $500.00 (already paid), for the “Best-dressed Team” at the next D&W Event. We look forward to some interesting designs coming forward

Driver profiles of some of the racers

People, small clarification; 'Best Dressed Team' ; Most professionally looking 'Racing Team', looking like something (picture) one can take to a potential sponsor, or in a Motoring Magazine.
Not a bunch of people in 'Three Piece Suit' looking like they going to a wedding.
I know everyone in D&W, smart enough to figure out what we are looking for.
This post is for everyone else.
Top

Wonder if there will be any more grudges this event..?

dubcity wrote:Wonder if there will be any more grudges this event..?

Waye look at trouble goin and start now lol lol but its always nice to have real competition rather than just easy wins.
Its nice to see some of d lower powered cars giving the high powered boys a good run for the trophies
Top

dubcity wrote:Wonder if there will be any more grudges this event..?

Waye look at trouble goin and start now lol lol but its always nice to have real competition rather than just easy wins.
Its nice to see some of d lower powered cars giving the high powered boys a good run for the trophies

Waye, look at the humility here...."always nice to have real competition rather than just easy wins"

But never forget that this unique Event has developed driving skills, maturity in not exceeding your limits, and exposed a whole new set of young/unknown drivers to Motor Racing.
Top

But in supercharged form now,this will be a car to look out for..

Devi and lyonns cars are really competitive and well built..hope to see them back in D&W..
Top

those yaris hatch actually drives really good in stock form. Handles pretty good too, real fun to drive and seeing that it supercharged now, its gonna be a decent contender....
Top

We listen, we note, we fix!
Thank you Sir.
Top

prep works have begun, hopefully i get everything done in time....heading offshore till next week

things to do on the Subaru
1. change oil
2. flush brake system since the fluid started breaking down and isn't as sharp as it was and fading was observed at D&W 2
3. recheck suspension and mounts...
4. realign
Top

Things to do before D&W:

And the competition has started!
Top

You or the car?

Doh forget Cash Award for Best Dressed Team......"Most professionally looking 'Racing Team', looking like something (picture) one can take to a potential sponsor, or in a Motoring Magazine."
Last edited by AutoSport on May 15th, 2015, 6:14 am, edited 1 time in total.
Top

hopefully before D&W #5 i would have the pleasure of finally getting my VR4 back on the road....Soon!!!!
Top

So we are gearing up for our D&W #3 Event carded for Sunday 24th May at ARC Car Park. Briefing meeting on Wednesday 20th May at Chaguanas Indoor Sports Facility at 7:00pm.

Attached is the Championship points listing after D&W #2. Should you have a query on what we have tallied to date thus far, please let us know and we shall check and correct where necessary.

We are insisting that first time racers (Rookies) can only do practice runs with an experienced driver with them.

Cone markings have been redone so that they can be accurately put back in place if dislodged.

We do hope to confirm some additional sponsors in the coming week,

But let us not forget that beautiful offer from our own Motor Sport Icon, Clive Sugden. He is still very mush interesed in our Events and may very well make a competitive return in the coming months. The offer? A cash prize of $500.00 to the most proffessional looking/dressed Team, that would have photographers or even Zorce rushing to publish pictures to show how creative we can be in Motor Sport in T&T.

Two queries received re points, one to be adjusted, confirmed missing 10 points, to be added for 1st Event - #152 - 59 Seconds Class
Top

We are pleased to confirm a partnership in support of our D&W Events with CARIB.

Further information will be given at our Briefing Meeting on Wednesday 20th May at the Chaguanas Indoor Regional Sports Complex. And all competitors completing and submitting a paid entry will be entitled to participating in a draw that will see the winners winning (win- win) Carib Product on the night.

Also support from 555 Subaru Parts Limited of #68A Bamboo # 2, Valsayn. who will be sponsoring a special Award for the Subaru Driver with the most points at the end of this Event.
Discounts will also be available to Subaru drivers for Subaru parts at this Company.

Other sponsorship partnerships being finalized.
Top

We are pleased to confirm that Wheel Wizard will be back with us on Sunday and we shall all be joining in their Special Celebration!
Top

Ok guys, I think I will be present to try to redeem myself
Top

At the briefing meeting for the D&W#3 Event carded for Sunday 24th May, many interesting points were raised and explained to competitors present.
First it was confirmed that for our Events to be run smoothly and on time, SCRUTINEERING WILL BE CLOSED OFF AT 10:00AM.

We have been able to attract some new sponsors and we must now ensure satisfying their interest and commitment to support our Events by doing everything within our power to stage an exciting and flawless Event.

We thank Wheel Wizard and Blue Mountain Waters for their support. We thank Clive Sugden for his sponsorship that will have competitors ensuring that their crew and supporters are interestingly attired to attract new sponsorship. We thank Subaru Imports for encouraging Subaru drivers to vie for podium finishes that would see them also earning a $500.00 cash prize, if they are leading in points at the end of each Event.

And this has spurred on competitor Joel Jagassar to also off a similar cash prize for the fastest Evo on the day.

And now we come to Carib. For starters, two lucky competitors who attended the briefing and submitted their paid entries at briefing, immediately won a case each of Carib Beer. We congratulate #620 Shadrach Faria and #616 Viju Badaloo on being the first winners for D&W #3.
Carib has committed to partnering with AutoSport to build and expand our Events. But we must also show that we can develop this Event, first to its original success prior to the 2014 challenges, and then expand competitor participation and spectator support. This we know is easily achievable once we all work together on this common goal. We know that our D&W Events have been a catalyst to encourage, develop and cultivate a host of new and young drivers, some of whom have been able to move on to higher levels of performance in other disciplines. We shall continue to push for even greater successes.
Top

Hmmm so what about d car and driver dat put d most licks on a subaru and evo at d end of d event? We need a sponsor to give dat car a prize also lol lol
Top

nismo_demon wrote:Hmmm so what about d car and driver dat put d most licks on a subaru and evo at d end of d event? We need a sponsor to give dat car a prize also lol lol