is all kind of excuses
Top

Utter bullshizz!! Too much damnn racket going on in this country!
Top

I got my ten private runs in. Kudos to rawle for keeping a cool head. Fack the idiots who caused this
Top

The logic my friend
Top

carpark limit is 5 or 10 km could be wrong
Top

Guys that was my choice. Not autosport. Was up there already and I did my own thing while tents were coming down
Top

ok coolz but what is going to happen now will there be a meeting to explain the situation?
Top

The officials will have to answer that
Top

THIS EINVENT MIT BE PUT AUF BECAUSE OF DURCH REASONS.
HEIL.
Top

So I guess all the right permissions etc was granted for the past two years?
So what happened this year Rawle, you did anything different?

Who has the next event there, TTKA or CARS?
They should watch their backs also, as plans may be to stop all motor sport events being held at ARC.
Seeing that ALL event's held there are successful.
Top

D&W test n tune...lol. had a good time feeling out the course
Top

So I guess all the right permissions etc was granted for the past two years?
So what happened this year Rawle, you did anything different?

Who has the next event there, TTKA or CARS?
They should watch their backs also, as plans may be to stop all motor sport events being held at ARC.
Seeing that ALL event's held there are successful. 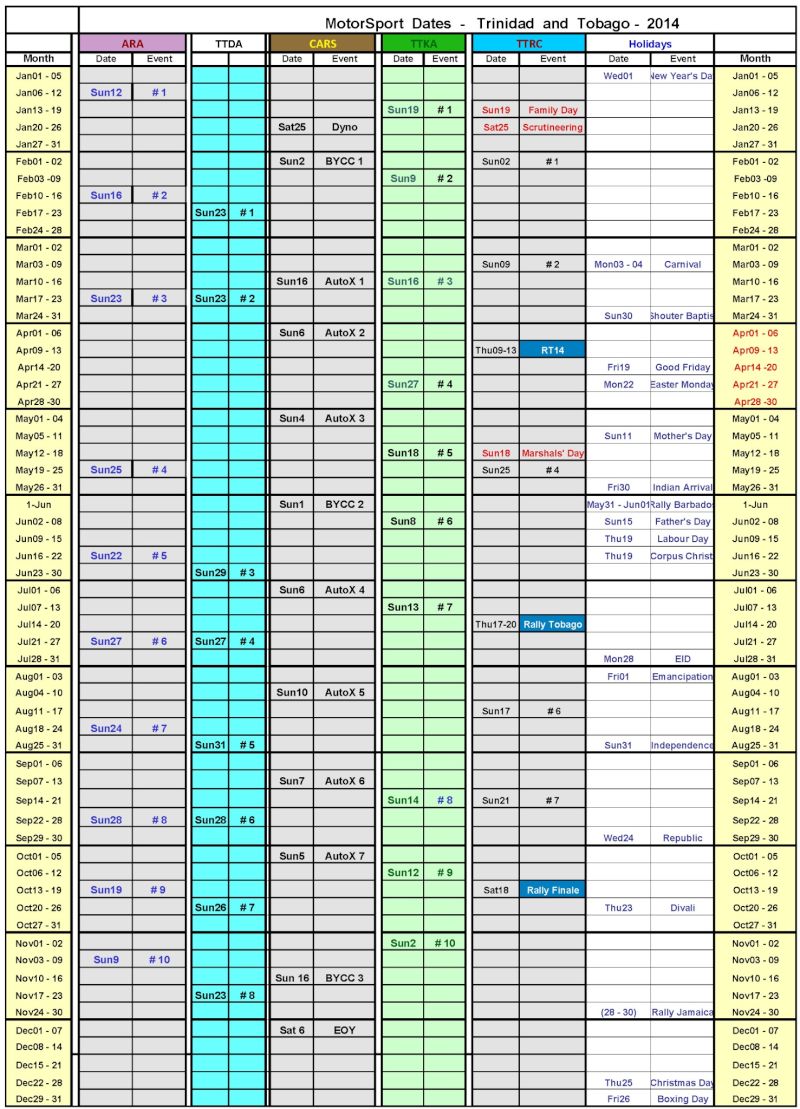 ^^ Right clicks and save.


Don't want to sound selfish but I glad I didn't miss anything.
And with that calender I will now be able to plan most of my weekends.

Crab in the Barrel Syndrome is back in T&T - maybe it never left but it is now affecting the young motor racers in T&T. The older generation would kill their own family for an inch of land and now they fighting for control of motorsport. What is wrong with sharing? The older motorsport leaders are not showing sportsmanship, integrity or setting good examples for the younger generation to follow in their footsteps. They should be ashamed of themselves for the infighting in motorsport. What legacy are they leaving when future generations mentioned their names? Are their families going to be proud of what they have done and carry themselves with pride when their relative name is mentioned? I think not!

Did they stop to think how many people they are hurting by their selfish actions? For mature people they are certainly acting like children - if I can't play with the toy - I would break it - this way no one gets to enjoy it.

The younger generation don't care about the politics in the past motorsport organizations. They just want a place to race with honesty, good organization and good people.

Rawle, as previously mentioned you carried yourself with grace. All participants their today together with the AutoSport officials have to be very proud of how they handled the situation. Their was no screaming, shouting, blaming, no one demanding money back, etc. - test and tune carried on - people socialized and had fun. 2:30 p.m. and competitors were still racing against each other.

To AutoSport and ALL Drag & Wind competitors, in Rawle words "we move on".
Top

canada wrote:Crab in the Barrel Syndrome is back in T&T - maybe it never left...

It never left. This is why I will not support, participate or spectate at events held by these nefarious individuals.
Last edited by Computerman on January 12th, 2014, 6:22 pm, edited 1 time in total.
Top

And they want to know why there is illegal racing?

...don't the police have criminals to apprehend? ...or right, there is no serious crime right now in T&T. Smfh
Top

Swifted wrote:And they want to know why there is illegal racing?

...don't the police have criminals to apprehend? ...or right, there is no serious crime right now in T&T. Smfh

There is no justification for illegal racing! Period!
Top

Good for you - we need more individuals like yourself to stand up for what you believe in and say it loud and clear by your actions. We need the support of people with integrity to do the right thing and show it publicly.

When you die all you take is your reputation. Are they proud of theirs? How do they feel when the read negative comments about their character?

Young racers are suffering because of their unscrupulous behaviour. The young generation have to stand up and make changes - let the leaders of the offending disciplines know that you will not support them if they don't do the right thing.

Look at Barbados, whose economy is in trouble but yet they are hosting an international event. The governing body of motorsport in T&T should be ashamed of themselves. We are a rich nation and yet we can't even have a decent local event. Guyana who we all think is backwards, real hicks - they have an internationally recognized event.

Say what, let us all keep fighting, bad-mouthing each other, do under hand things and continue with our corrupt ways - while the smaller (3rd world) nations moves on past us.

I sincerely hope that the young motorsport men and women of integrity in T&T stand up for the future of motorsport if not for yourself but for future generations who will benefit from your stand
today.
Last edited by canada on January 12th, 2014, 7:31 pm, edited 1 time in total.
Top

As you say that.

When will TTASA be up for renewal of the FIA jigamathing?

Clearly they need to change that.
Top

It's funny that they are using an artwork to advertise the event with auto sport, cars etc on it...
The clip from the news they saying they want to unite but then a stunt like today happened.

Hopefully someone who knows this info publishes it - then you rally the troop to petition FIA directly to effect a change if it is possible.
Top

Didnt see any posted speed limit at the carpark... so I obeyed...


Sorry this happened.... what goes around comes around...
Top
Advertisement
Post Reply
149 posts