So we are about to run our second Event for 2013 –
Briefing - Wednesday 27th at 7:00pm at MOSPORTT, Frederick Settlement Caroni. Event on Sunday 3rd March. 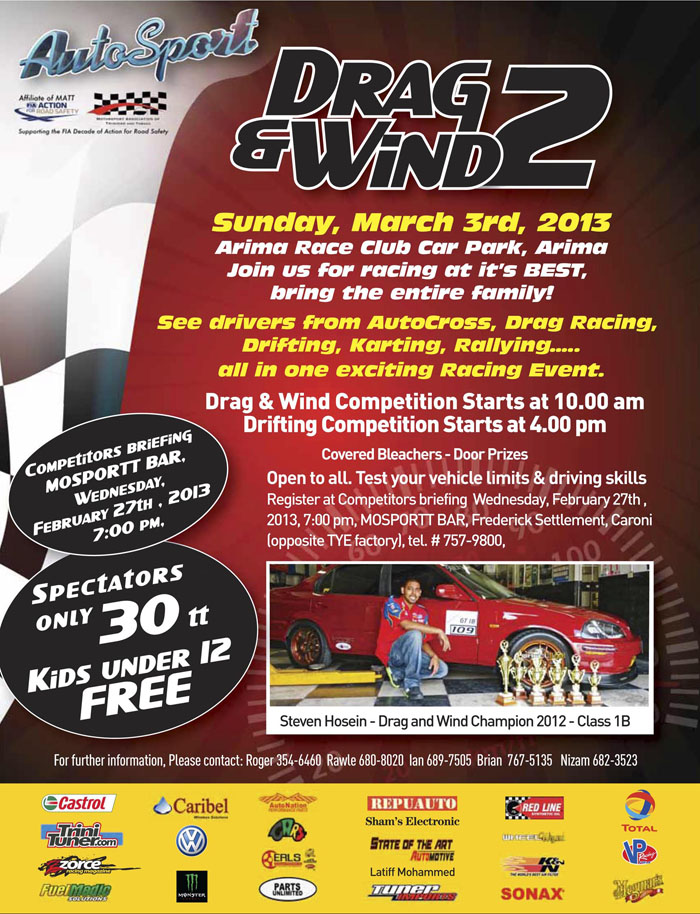 Just to repeat for some who still have not gotten this clear – competitors receive three “person” passes and two Pit passes. The three passes are for the driver plus two other persons. The two Pit passes are for the competition vehicle and a service vehicle – so, the person coming in with the competition car or service car must have a “person” pass.

As agreed at our last drivers meeting, we now include 10 points for the fastest competitor in Class, both A and B, and they will all receive hampers.

Again we repeat our effort to start at 10:00am, and when the drivers meeting is completed, we may very well not accept even those who are registered but come late. So we urge everyone to submit, or have their entry submitted by someone at the briefing meeting. We know that several competitors work offshore or “foreign”, so be warned….

We are going to be having additional support in scrutineering, so this will start very early also.

In the past we had the competitors who participate in drifting, coming out at the end of the event and giving us some really interesting and skillful driving displays. As of this Event, Lube Tech has come on board to sponsor a separate Drift Class in competition. This will take place from approximately 4:00pm when we complete our Drag and Wind(ing) competition.

As stated before we shall be having a new PA system in place - courtesy Sham’s Electronics. And also a new concessionaire, one who worked with us while still at Waller Field – Café Café.

And also looking to have some special guests in attendance…. a Sunday School Class from the South, who will be attending a Motor Racing Event for the very first time!

And we indicate that the bushy area to the South of the Car Park has been cleared thanks to Kaizen Trading Limited – the intention is to eventually have this paved and then have the pits moved to this area and have a bigger area for racing… down the road.

The bush and rubble pushed to the perimeter was used to build a burm. The intention here is to have this as a natural barrier, and we now suggest that for this Event, we would like competitors to pay their normal $150.00 entry fee PLUS one Bougainvillea plant, that will be planted along this burm. This is optional, and if keen to support this initiative, you can bring the plant on Sunday or donate an extra $25.00 and we buy the plant.

Please remember the our permanent noise concerns and also discourage anyone from playing loud music in our pit area.
Last edited by AutoSport on February 25th, 2013, 11:13 pm, edited 1 time in total.
Top

nice...will make arrangements to get my permission slip signed.
Top

looking forward to the event
Top

Car gone to fix again so i def cant run but will be there sipping some beverages and taking pics as usual.

and if all goes well so will the evo
Top

Hopefully I'll be there for this one
Top

Hi all,
just a quick note regarding the drift competition. In conjunction with members of the drift community, the drift competition is open for any and all drivers with a RWD car. All competitors are asked to register as per usual for D&W competition, i.e. the same $150 entry fee on reg. night at Mosportt and to report by 10 am for scrutineering on Sunday.
As you all may know, drifting is a judged sport and as such there will be 3 judges tabulating unbiased scores. There will be an open practice on the drift course, followed by a qualification period of 2 runs per drifter. The better of these 2 runs will be recorded and used to establish the results.
Furthermore, the course layout would be clearly highlighted at a drift driver's meeting on the day such that drifters will know what exactly the judges are looking for.
Remember this is the first competition of this kind so we ask for patience and support as we seek to advance the sport. Don't be afraid to raise concerns or questions.
Thank You
Top

no category for RWD drivers who try to drift with an open diff car and only manage to spin out, and occasionally stall the engine, no care
:p
Top

MG Man wrote:no category for RWD drivers who try to drift with an open diff car and only manage to spin out, and occasionally stall the engine, no care
:p

yeah dread...i feeling specifically victimized with this one

Just to let everyone know that the drifting and all competitors will be subject to the standard D&W rules of engagement, namely timely submission of entries, scrutineering, drivers meeting attendance and above all respect for discipline. As discussed with those in our prior meetings, we All have to ensure that this aspect is done in harmony with our accustomed standards and we can all have a great day.
Top

MG Man wrote:no category for RWD drivers who try to drift with an open diff car and only manage to spin out, and occasionally stall the engine, no care
:p

yeah dread...i feeling specifically victimized with this one

....you should be victimized for that creation yuh driving...but another day.
Top

wagonrunner
TriniTuner 24-7
Posts: 13349
Joined: May 18th, 2004, 9:38 am
Location: Distancing myself from those who want to raid the barn but eh want to plant the corn.
Contact:
Contact wagonrunner
Website WLM

wagon r wrote:....you should be victimized for that creation yuh driving...but another day.

and I thought allyuh was hard on me!
Top

lol you and me both
Top

MG Man wrote:lol you and me both

So can we get Kitchiner or was it Sparrow with "Both ah dem"?
Top

I'll be there!
Top

Just a hint for the late comers who will be early for the next event... tonight at Briefing we had 71 entries!

So we could put liquids in them DUUUUUUUUUUUUHHH.

I dunno bout the coolers...
Top

So we could put liquids in them DUUUUUUUUUUUUHHH.

I dunno bout the coolers...


the coolers hold the liquids for us

it guh fit on one page??? hahahaha
Top

Point to note not all of those listed in Drift will be taking part in the D&W Competition.
Last edited by AutoSport on March 1st, 2013, 3:46 pm, edited 1 time in total.
Top
Advertisement
Post Reply
96 posts