now i no T line box are large but if i could get it small version it will be best cuz im tight on trunk space,want it tune to about 35-40hz
so if some one could help me design this box it will be grate-full thanks
Top
Advertisement

this should help i hope

Your 'tuning' will be the resonant freq of the driver , 45hz in a t line.
Unfortunately, this driver is completely unsuitable for a t line. Parameters are way off.
This is what it looks like. You can build it if you like, its a standard constant cross section of 240 sq cm @ 200 cm long. You can try to eq it into submission, but your better off with a standard ported enclosure.

I tried a skar 8" in a tilin a while back...driver is not suitable as meccalli said. Alot of peaks and dips in response along with subwoofer phasing issues.
Top

MONGO wrote:I tried a skar 8" in a tilin a while back...driver is not suitable as meccalli said. Alot of peaks and dips in response along with subwoofer phasing issues.

There are "T-lines" and then there are properly-designed T-lines. A driver with a high Qts like the one you have poses some challenges, but it may be possible to come up with a T-line for it. If it is possible, most likely a TL with your driver will have to have a significant taper (line decreasing in cross-section from throat to mouth) rather than the constant cross-section 1/4 wave boxes that people pass off as T-lines these days.
Top

The one i built was tapered, cone area at throat to 1/2 cone area at mouth but not sure if it was properly designed it was when i was a beginner to horn response.
Top

MONGO wrote:The one i built was tapered, cone area at throat to 1/2 cone area at mouth but not sure if it was properly designed it was when i was a beginner to horn response.

The problem here is that the volume of the TL (and therefore the cross-sectional area, length and taper of the TL) is proportional to the driver's Vas, not Sd (cone area). This is why I can say with some certainty that TLs designed with cone area being used to determine the TL's cross-sectional area are not properly designed. Old TL theory, which was subsequently shown to be incorrect, used cone area as the determining factor, but work done by Martin King has shown that the volume of the line is dependent on Vas.

And here's the issue with this particular driver - the Vas is very low, making the design of a good TL for it near impossible to achieve in practice.

For example, consider this offset-driver TL alignment for the SKAR Audio VVX-8 D2 (I guessed a few parameters, Le and Sd, as they were not given). On paper it looks good, but when you try to fold it into a box, it's too small to fit the driver.

Martin King's work was on mass loaded lines and tqwt's however there was much success using the older formula ( this old design is what he heard that made him interested), conclusions were drawn after modelling software became possible and preferable t/s parameters observed. I can take a woofer of suitable t/s (low fs, qts, qes) woofer, input 20% more sd as a constant taper and line length based on the quarter wavelength of Fs @(340m/s) @ 0.25 driver position in line length and get damn close to the best response I can in hornresp. Try it!

So I think there's a lot of validity to that method with drivers that are well suited to its design. Bjorn on diy always designs mltl's but I don't see the difference being significant to a 4th order ported. An mltl is practically your standard quarter wave tube with a *port. I've also seen alot of guys get good results by using much shorter pipes and stuffing them until it sounds good even though the respective line length never changes despite isothermal function. All I can say, the ones I've built using the old formula works dandy and meets the expected design's performance.
Top

That was after he put together a formula that more accurately described the "classic" TL. I actually conversed with Martin King about this way back in 2003(!) if not earlier. The reason why you no longer see the classical approach outlined on my TL design page is a result of those conversations with Martin. The classical approach is obsolete.

meccalli wrote:however there was much success using the older formula ( this old design is what he heard that made him interested), conclusions were drawn after modelling software became possible and preferable t/s parameters observed. I can take a woofer of suitable t/s (low fs, qts, qes) woofer, input 20% more sd as a constant taper and line length based on the quarter wavelength of Fs @(340m/s) @ 0.25 driver position in line length and get damn close to the best response I can in hornresp. Try it!

It looks like you already tried it using the parameters of the Skar Audio driver and it did not work well. It's not because the driver was "unsuitable", it's because the classical TL approach of just looking at Sd and Fs ignores or does not account for the other driver parameters that basically define its behaviour, so it is inherently flawed. Martin's approach takes all of these parameters into consideration, so it is more accurate. It just so happens that in this case it's difficult to design a TL with a flat passband for this driver that can actually be built because the Vas is so low.

meccalli wrote:Bjorn on diy always designs mltl's but I don't see the difference being significant to a 4th order ported. An mltl is practically your standard quarter wave tube with a *port.

There is a big difference. IMO MLTLs and TQWTs are attempts to keep the advantages of a TL (e.g. extended low frequency response) and resolve the problems caused within the passband at higher resonance frequencies in the TL (a "straight" (constant or near-constant cross-section) TL is actually the worst performer in this regard). By moving those response aberrations higher in frequency, they are easier to deal with via lining or stuffing the TL.
Top

Well yeah, you're right, definitely reduces that factor of trial and error stuffing to deal with the(double peaks) resonances caused by the air velocity @ Qt and Qd. I guess i've always just looked at the difference between mltl and vented as a matter of clever geometry to manipulate the sound. I still wouldn't call it completely flawed though, I have an infinity 850w in a standard pipe that's stuffed, and it's my favourite thing to listen to slap bass on, so effortless. A little trial and error is good sometimes lol.
Top

did u get through with this -- is it what u expected ?
Top

Tries it but didn't get true
Top

Hi
Will 2 Treo 1244 SSi work in T line
Bass box pro 6 only suggesting seal enclosures for this sub because of low (EPB) not sure if I got acronym correct
Any thoughts?
Top

Haha, yeah it's ebp, efficiency bandwidth product. Its just a general rule, what's the value, if its anywhere in between 50 and 100, you can go either sealed or ported, it's just a guide and relates how well the driver is controlled in regards to enclosures. I would think the nature of a t line dictates a high ebp value req. generally.
Top

Hi
My EBP is 36 based on BBP6 soooo I'm not sure. I went and checked some videos and did the maths for my sub anyway and I got something like 116inch I believe for line length
What's the worst that can happen if I try it?
Top

you waste a 300 on wood glue and screw

LOL if you can't model it, try it under controlled conditions if you want to experiment
Top

I really do not want to junk wood though plus it's real work for a non carpenter lol
Is it a hit n miss ? Or does it make sense to go ported specs from Bass box 6
Top

An ebp value of 36 is really low and would need a system that lends mechanical support to avoid over excursion. If you do decide to build the line, you'll have to monitor power and cone motion or stuff the line ALOT. This would probably be the best option of a densely stuffed line if you build it. Design seems more complicated than necessary. There's alot of standard configs that have been used with good results. Or you can always build that sealed enclosure lol. 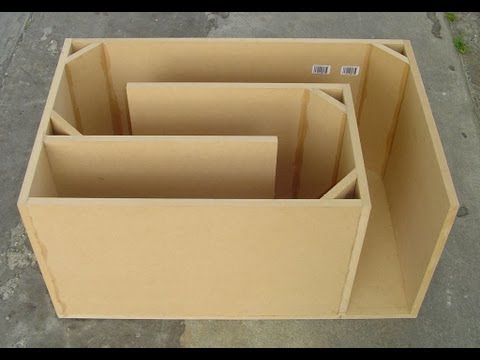 I built this and it sounds ok, running a JL G4500 to test out
I will keep an eye out for the over excursion
Top

Testing with sine sweeps etc and tone test,
I forgot I didn't break in woofers so they very stiff after KP rebuild
Top

I will try a sealed box to compare
I saw a couple videos of a DIY home theater built all T lines
I might just move the enclosure to my theater instead if this doesn't work out
I will have to look at a sub with a High EBP
Any suggestions?
Top

Kudos! you built it! experimentation is always worth a shot, try some heavy stuffing and compare that to your line. A good t line will give you the benefits of a sealed without the major pitfalls of shallow rolloff and no backwave reflection through the cone, it's even sorta IB in a sense. If you switch drivers, remember to select one within the fs range of the current driver to correspond with the line length.
Top

What I noticed at low volumes its produces a. nice true bass as I was listening to some Bob Marley:)
I saw some use T line in mids and was looking to try that also
Has anyone tried it?
Top

I've used open baffle full ranges, but the concept of t lines work the same way in regards to the back wave. It won't reflect back into the cone and produce any unwanted interference in reproduction. Some will damp directly behind midranges in sealed enclosures to avoid that. If you go with a t line for mids/fullrange, the geometry of the enclosure will have to be deep and horizontal for best effect.
eg. 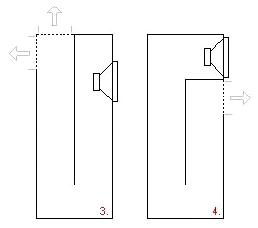 Design 4. illustrates what i'm trying to say. Subwoofer designs are less subject to that concept given the nature of low freq.
Top

Here are the links I watched

If you're really serious bout designing and building a pair, hop onto diyaudio.com and ask, the guys are really friendly and always willing to help. But the easiest thing is just to build a proven design that others have had success with.
Top

Watching those videos for guidance on what results you can get is like trying to shop for the best tires to fit your car with the sellers talking about everything else but what's most important - the rim-size and width of their products.

Unfortunately there is a dearth of really good websites covering DIY designs, but they are out there. You just need to look for the following:

1. Has the DIYer simulated what he's planning to build? This should at the very least a simulated frequency response curve, and ideally and impedance response graph as well (the latter is easier for most people to measure with great accuracy).
2. Has the DIYer actually built what he simulated?
3. Has the DIYer measured the response of what he built and compared it to the simulation?

Anything else is just fluff or the "let's just build it and see what happens" approach. That last time I took the latter approach to DIY was oh, about 20 years' ago, LOL.
Top
Advertisement
Post Reply
42 posts

Users browsing this forum: No registered users and 15 guests