Well there's one more epic gravel rally left for the year and it will be Rally Jamaica 2013. The last few years have seen this event struggle a bit with entries but they seem to be well on their way to a big event this year with a number of big name competitors.

Group A/N will see a huge turn out with Betts, Stuart, and Craig Sumair leaving from Trinidad. Also in the mix is the Ex-Powell Evo IX that Jamaican Gary Gregg will be driving. You would remember this is the car that John did the 2012 NACAM series in. Radj Pershad from Suriname will also be heading over in his newly built Subaru N10 which many of you saw at Rally Finale in Reform the other day.

A major hype this year for Jamaica is 8 cars coming for the final round of the NACAM Rally Championship. Of course this leg was originally intended for Trinidad but had to be moved. Nonetheless it's great to have NACAM in the Caribbean region and there are some big names. Trivino, Lombardo, Izquierdo, and Fessman. All these guys have competed at P-WRC level this year and it will be great to see our guys match up to them on neutral ground.

The Rally should have a total of about 30 competitors and we will see how the planning comes together in the next few weeks.

So a few questions that will be answered that weekend
- Will Powell's second date with the Fiesta give him enough to de-throne a flying Panton
- Can the 1600cc Fiesta handle the 2000cc Focus and Suby
- How quick will Betts be? He's the most experienced non-Jamaican at the event (15x entrant)
- Can Sobby and Craig hold onto the NACAM boys?
- Will Dumplin take enough pictures?

wow ! nice to hear powell will be out !

is the fiesta his new car or rental for the event ?

foss wrote:wow ! nice to hear powell will be out !

is the fiesta his new car or rental for the event ?

Just spoke to Robbie - it's a rental from Ford M Sport. Not sure what livery it will have but I'll post a pic as soon as we find out!!!
Top

For those of you who are interested here's some info ($USD):
Flight - $600 - lands at Friday noon - returns Monday 11pm
Hotel - Knutsford Court - Nice Kingston hotel, the official Rally hotel, $100 per night double occupancy, tell them you coming for the Rally and you will get the rate for spectators
Rental Car - pick one up at the Airport for about $300+ for the weekend

I've decided I am going to try to go

Oh yeh, keep the updates and pics coming too!
Top

upgrading the car with a dogbox and new suspension. me and dmitri ready for yuh

Yes Mr. Shifter, that Subbie has its work cut out for it my friend.... De boys comin!
Top 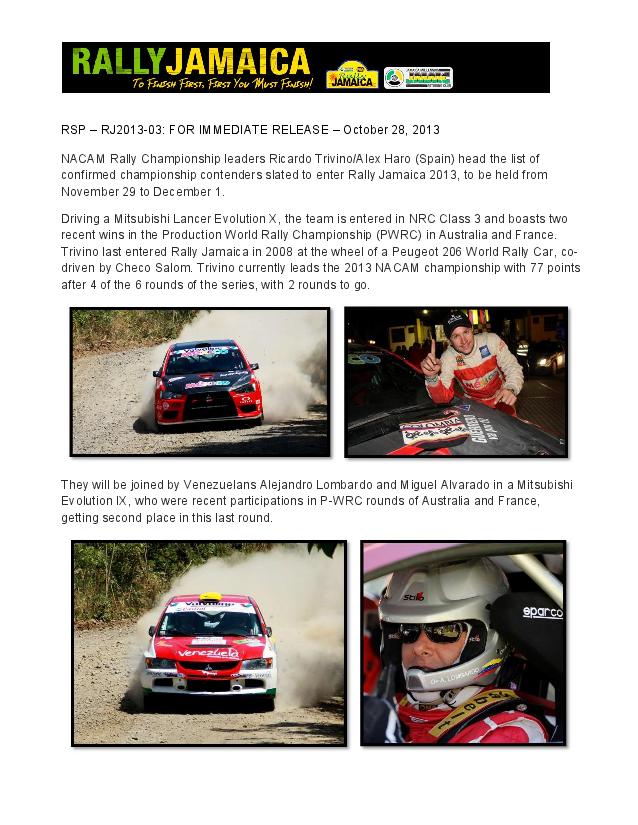 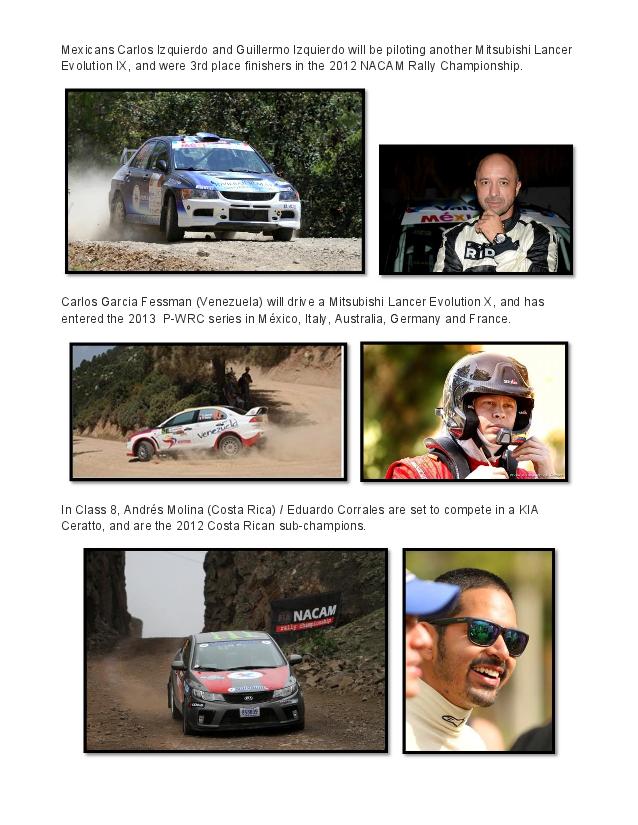 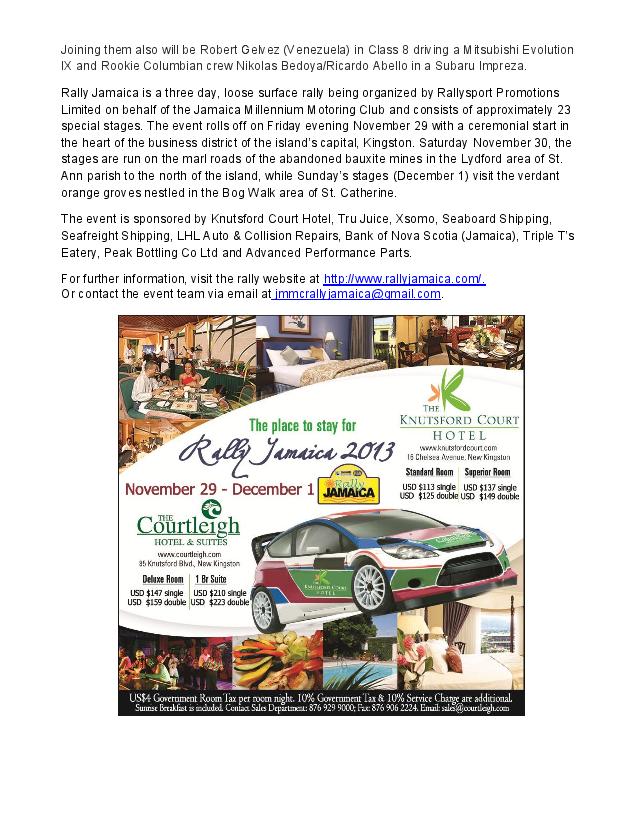 Driving a Mitsubishi Lancer Evolution X, the team is entered in NRC Class 3 and boasts two
recent wins in the Production World Rally Championship (PWRC) in Australia and France.
Trivino last entered Rally Jamaica in 2008 at the wheel of a Peugeot 206 World Rally Car, co- driven by Checo Salom. Trivino currently leads the 2013 NACAM championship with 77 points
after 4 of the 6 rounds of the series, with 2 rounds to go.

They will be joined by Venezuelans Alejandro Lombardo and Miguel Alvarado in a Mitsubishi
Evolution IX, who were recent participations in P-WRC rounds of Australia and France,
getting second place in this last round.

Mexicans Carlos Izquierdo and Guillermo Izquierdo will be piloting another Mitsubishi Lancer
Evolution IX, and were 3rd place finishers in the 2012 NACAM Rally Championship.

In Class 8, Andrés Molina (Costa Rica) / Eduardo Corrales are set to compete in a KIA
Ceratto, and are the 2012 Costa Rican sub-champions.

Joining them also will be Robert Gelvez (Venezuela) in Class 8 driving a Mitsubishi Evolution
IX and Rookie Columbian crew Nikolas Bedoya/Ricardo Abello in a Subaru Impreza. Rally Jamaica is a three day, loose surface rally being organized by Rallysport Promotions Limited on behalf of the Jamaica Millennium Motoring Club and consists of approximately 23 special stages. The event rolls off on Friday evening November 29 with a ceremonial start in the heart of the business district of the island’s capital, Kingston. Saturday November 30, the stages are run on the marl roads of the abandoned bauxite mines in the Lydford area of St. Ann parish to the north of the island, while Sunday’s stages (December 1) visit the verdant orange groves nestled in the Bog Walk area of St. Catherine.

For further information, visit the rally website at http://www.rallyjamaica.com/. Or contact the event team via email at jmmcrallyjamaica@gmail.com.
Top 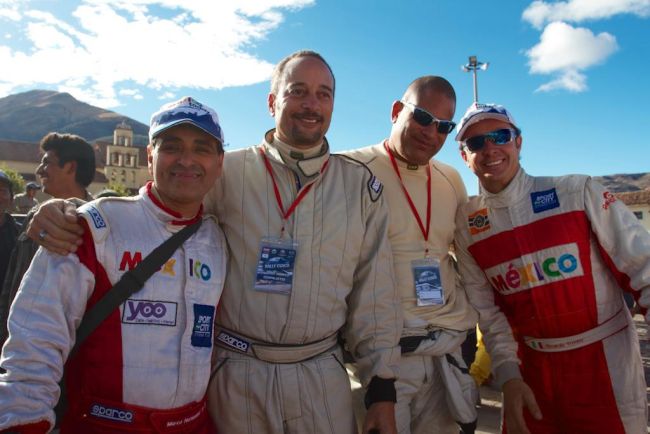 From what i know of the NACAM guys, they probably won't be as fast as Betts and possibly Sobby. But they are SUPER consistent. They will only be allowed 2 passes through the stages for pacenotes while the non-NACAM guys will be allowed multiple passes on the stages during the recce.

As a result the NACAM drivers are usually cautious and very calculated, which usually makes them consistent and not willing to take big risks. Our experience in 2012 showed proved that John was faster but with so much stress before each event with the logistics he was never able to settle and pull out a win. Trivino will be the man to beat from NACAM, but the rest of the guys have all had very good experience with P-WRC and lots of seat time to go with it.

in for a good event
Top

tuff call ..... i should be back in jam during the week and will try to stay on for the rally.
Top

wagonrunner
TriniTuner 24-7
Posts: 13279
Joined: May 18th, 2004, 9:38 am
Location: Distancing myself from those who want to raid the barn but eh want to plant the corn.
Contact:
Contact wagonrunner
Website WLM

Ignorant Ignis wrote:looks like i'll be there from the 29th to the 6th

boy, sometimes you more tempting than a campo buffet.

so, less than 2 weeks to go, cars should be loading onto the wharf by now....did everybody make it?
Top

looks like i'll be there from the 29th to the 6th

satday stages are Reynolds, Lydford/Haddon Pen and airstrip (craig, sobe, make sure you bring an extra set of balls

sunday will be New Works, Bybrook/Koorby, Wakefield, and a combination wakefield/koorby stage like last year. Finish lyme will be by the Bybrook bridge spectator area

Shame about no Kingston super special this year, I had a good time standing on top of the Victoria Pier building last year...

No matter, you know we there backing the JetconCars subie...
Top

CD4Accord wrote:Shame about no Kingston super special this year, I had a good time standing on top of the Victoria Pier building last year...

No matter, you know we there backing the JetconCars subie...

appreciate it my friend

no more straight pipe though - couldnt deal with the noise anymore. nice and quite now like sobe's subbie
Top

https://www.facebook.com/NicholasBhajan ... phy?ref=hl for all your exclusive Rally Jamaica coverage.
Top

did the cars reach yet!!
Top

Looking for some more info on the Saturday stages... Where exactly are these places?
Top

CD4Accord wrote:Looking for some more info on the Saturday stages... Where exactly are these places?