Automotive Non-Technical topics... Just anything car related for the gear head in all of us

Saw it this week in suchit trace. Wonder how much he's calling for it.
Top
Advertisement

That silver car looks quite familiar. On weekends always by classic seamen.
Top

Check out this one in 2001,all through the vid,couple close-ups and side shots..

That silver car looks quite familiar. On weekends always by classic seamen.

Sent from my ONE E1005 using Tapatalk
Top

That silver car just spolit the pic with the other car

heard the driver is a real kant
Top

SiRMX wrote:Hey Tuners! I have seen two v8 Land Rover Defenders Series3 Stage1s SWB for sale in the space of two months. The sellers have claimed that there were only 24 made worldwide with the short wheel base. Were they ever so rare? Find it kinda incredible and hard to believe since I think there are at least three in the country. Can anyone with knowledge shed some light? If that's really the case, these machines going cheap.

I owned one,up to today it was the best sounding vehicle I ever owned,that V8 gargle was priceless. mine had the big a/c evaporator on top the roof. I painted it white from the blue I got it,painted around the lights black and made some great bush bars for it,that thing could've gone anywhere,I used to park it on top an old load of hard asphalt for kicks,it literally clung on the edges as if it had fingers and toes. I regret to this day selling it and hope to get one in the future.

I don't believe they were as rare as the person suggest though,but I'm really not sure,the gas tank was small and it was thirsty but that didn't really matter. I think it used to cost me about $90 to fill in those days. I was really connected to that vehicle,got a nice grey console for a 'modern' stereo from a Mazda 3 ton lol,it fit perfectly in the big dashboard void,hooked up some nice ready made speaker boxes all over the interior,man but the best music was the sound of that exhaust,damn I could hear it now!!! Being a Landy it was a bit awkward in some respects,but hit the dirt and rough terrain and you feel like your'e in a Porsche (dirt edition).

The brakes were just adequate but terrible when the adjustment apparatus with some very harmless teeth wears and then your braking gets totally out of sync with your shoes all doing what they wanted and the pedal would feel like a big stone sometimes,but because of the full time 4wd and the complicated drive train when you come off the gas it was almost like a Jake brake,of course the manual helped too,the price of parts were ridiculous at the agent at the time,parked her up for a while eventually got the parts after a discount (hey I was an early 20's with a small kid!) ran it for a couple months and sold it to an artist guy living between Trinidad and Tobago,forgot his name,would love to track it down though!

Thanks for your response brother! I would have loved to been able to purchase any one I saw for sale! I grew up in the west and remember seeing a beautiful yellow one zipping around a lot! That V8 sound was amazing!
Top

Some more oldies for you guys!

An old Austin Cambridge languishing in a garage and two well kept Toyotas!

That silver car just spolit the pic with the other car

heard the driver is a real kant

I see that car passing many a times on the Manahambre Main Road and boy I want to juss plenty rotten eggs on it.
Top

interesting, considered it hasn't left the garage since december, and hasn't been down that way since maybe 2014
Top

^^He probably saw a Telstar with a bodykit.....
Top

wagonrunner
TriniTuner 24-7
Posts: 13232
Joined: May 18th, 2004, 9:38 am
Location: Distancing myself from those who want to raid the barn but eh want to plant the corn.
Contact:
Contact wagonrunner
Website WLM

Any old Jaguars for sale?
Top

This was actually for sale sometime last year,30k. Think it sold now though.
Top

cudnt take a shot from the front becuz driving.... but wow....even sounded period correct (not an RB or a Rapper) wasn't able to get a full shot by I'm in love with this Belmont, very rough about the edges but the appeal to me is undeniable

^^ car was brought in by Thomas Khal..then Manager of Republic Bank Credit Card Center (well before MSD split up into Data Center and CCC)...used to treat that car like an outside woman.. Didnt have those wheels though.. had some Western Wheels on it.

Well...what model of mazda is it?

Calor wrote:Well...what model of mazda is it?

That actually was David Nakhid's father car.. He died a couple years ago and the vehicle was sold a while after following his death. This vehicle was kept in great condition over the years. I and all wanted to just have it.. The rims on it is new and like the new owner gave it a clear coat job.

eliteauto wrote:wasn't able to get a full shot by I'm in love with this Belmont, very rough about the edges but the appeal to me is undeniable

Not sure if these was posted already... 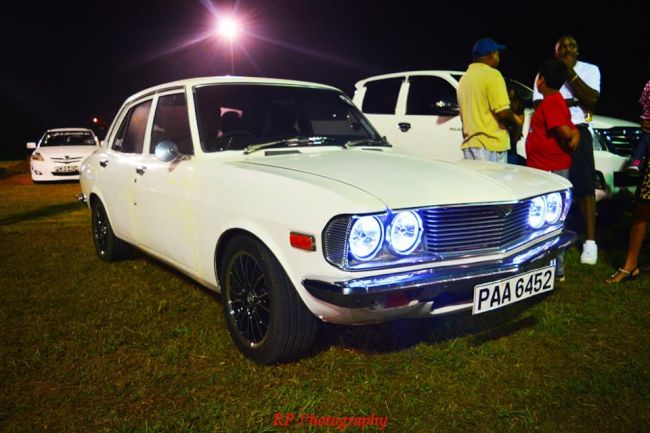 Them B12 tail lights tho 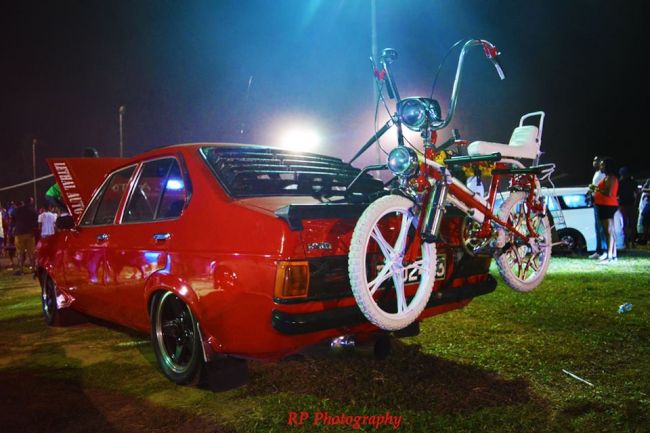 Return to “The Car Park”